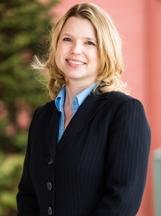 Rebecca immediately returned to Berks County and began her legal career in the Public Defender’s Office where she represented the indigent. She remained in the Public Defender’s Office for six and a half years. During that time she gained invaluable courtroom and trial experience. She tried enough major felony cases to become eligible to represent those accused of capital murder, a certification that is only achieved after meeting specific requirements for trial experience, continuing legal education credits, and years in practice.

In June of 2012 Rebecca went to work for Bentley Law Offices and began practicing almost exclusively in the area of family law. Her extensive courtroom experience allowed her to transition quickly and smoothly into representing residents of Berks, Lebanon, and Lancaster Counties in family matters. Rebecca represents clients primarily in divorce, child custody, and spousal and child support matters. This includes appearing before judges in all three counties for custody hearings and trials and divorce matters, appearing before Divorce Masters in all three counties, and assisting clients with navigating the Domestic Relations Section in those counties.

In June of 2013 Rebecca was elected to the Board of Directors of Mentors for Berks Youth. M4BY is a non-profit organization dedicated to guiding Berks County students with potential toward post-secondary success by providing one-to-one relationships with accomplished, dedicated adults. Their vision is to encourage Berks County youth to become assets in their communities by nourishing and promoting their academic, social, and cultural development. Rebecca also serves as the chairperson of the governance committee.

In January of 2015 Rebecca became a shareholder and partner with the firm, whose new name became Bentley, Gibson, Kopecki, Smith.

Rebecca Smith resides in Bern Township. In her spare time, she enjoys spending time with her family, including her parents Mike and Cindy Smith, owners of Tails A’ Waggin’ in West Lawn, Pennsylvania and her brother Matt Smith.  Her family also includes her dog, a corgi mix named Gracie. She also enjoys traveling, gardening, cooking, and frequenting area auctions with her husband Matthew Kopecki, who is also a partner with the firm.

Past Employment Positions of Rebecca Smith