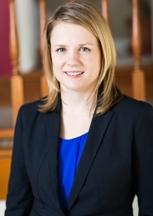 Anne Gibson was raised in Lancaster County, Pennsylvania with her four younger brothers.  She grew up playing soccer and still plays as much as possible.  Anne attended college and law school at the University of Pittsburgh.  After school, she moved back to Lancaster, where she lives today with her husband and two children. Her husband Eric is also a partner at Bentley, Gibson, Kopecki, Smith, P.C.

After law school, Anne was a law clerk for the Honorable Dennis E. Reinaker, a Lancaster County Judge. She then worked as an attorney in the Lancaster County Public Defender’s Office where she represented people through all stages of a criminal case, including jury trials.  She also served as a part of the Lancaster County Mental Health Court team as a representative from the Public Defender’s Office.  Anne’s background in the Public Defender’s Office provided her with an understanding of sensitive legal issues as well as skills in negotiation and advocacy for her clients.  Since joining BGKS as a partner, Anne continues to advocate for her clients facing issues with family law matters. Anne understands how to fiercely represent clients while also maintaining compassion for their circumstances. This balance is what drives the best possible outcome for clients.

Past Employment Positions of Anne Gibson